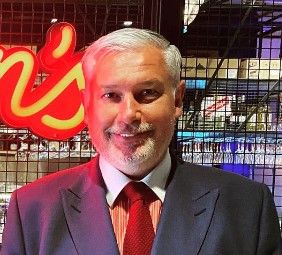 General Manager, Hotel Brooklyn
Paul Bayliss MBE manages the roll-out of Hotel Brooklyn brand in the UK for Bespoke Hotels. The brand is a luxury lifestyle city centre hotel with a cool vibe and ambition to be accessible to all. The first one in Manchester is the most accessible Hotel in Europe and won Accessible Hotel of the Year at the 2021 Catey’s winner, Leicester HB is no different Paul is a multi award winning GM  / MD with unique experience of large scale high end hospitality delivery City Centre, Resort and Stadium. Hotels is his second career having spent 24 years in the army as a chef-soldier, logistics professional commissioning latterly in his career. He became a world champion chef in 1995; was awarded an MBE in 2006 for his services to the industry; won a Cornell Scholarship with The Master Innholders in 2016’, became UK Hotelier of the year in 2018 and a Master Innholder earlier this year. He possesses a unique insight in people development pulling his experiences together by studying Human Resource Development to Masters level. His hobby is cake decorating!!
Sessions